Being a mother is the best and hardest thing I have ever done.

I had a textbook perfect pregnancy until the beginning of my third trimester. I hadn’t even decorated the nursery, bought a crib, or had a baby shower, when I was hospitalized as a precaution for preeclampsia with my first baby at 29 weeks. As I started bedrest, doctors ran tests and wanted to keep me under observation and delay delivery as long as possible to give my baby every moment to grow in my womb. After a few days I became suddenly and violently ill, and my baby and I were in crisis as I became eclamptic and had a seizure. Blood tests showed my liver was shutting down. I had never heard of HELLP syndrome, a very serious pregnancy complication that can cause liver damage and cerebral hemorrhage, and can be fatal for mother and baby, but now I had it!

Shocked, my husband watched the frantic race as doctors wheeled me off for an emergency C-section. Minutes later, he walked down the hall to the NICU with our 3-pound son Ethan in an incubator. I was heartbroken when I awoke and couldn’t meet him or hold him, because I was not healthy enough to visit the NICU, yet we were so thankful he was stable and doing well for a preemie his age.

I had a second seizure the next day. Tests showed I’d had a brain hemorrhage, and I was sent to the adult intensive care unit (ICU). I suppose those mothering instincts were raging, because all I could think about was the need to provide breast milk for my baby. Some wonderful nurses brought a breast pump to my room and showed me how to use it, but my weak body wasn’t ready to produce more than a few drops at first, so little that we put it in a syringe. The hospital saved every precious drop and made sure it went into my son’s feeding tube.

No parent is prepared for the pain of seeing their tiny infant struggling to hang on to life, with wires and tubes everywhere. He was so small I was worried I would hurt him by holding him, and his diapers were smaller than my hand. The NICU was an amazing place, and we were so thankful to learn that our baby would receive supplemental donor human milk from Mothers’ Milk Bank at Austin until my supply increased enough to meet his needs. Every day, nurses pulled out bottles of donor milk to fill his feeding tube, and I held him as he “drank.” This amazing gift, from mothers I would never meet, helped my son grow healthy and strong and build immunity when he was so fragile. Although I wished to be able to meet his needs myself, it gave me such peace of mind to know he was still getting the best “medicine” possible –- mother’s milk. 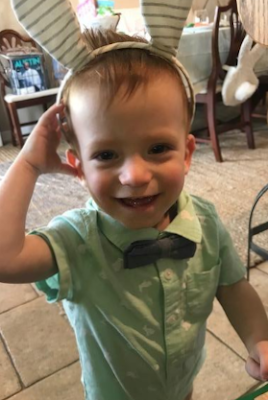 Ethan did grow healthy and strong, and he came home with us after 67 days in the NICU on his exact due date of December 26. He was the best Christmas present ever. I was able to meet his needs with breast milk by that time –- with a new level of respect for the effort donor moms go through to pump milk and bottle it, fill their freezers, ship it to the Milk Bank, and share with babies like mine. I am happy to report that he’s thriving! He’s now 18 months old, funny, happy, strong, healthy and smart.

I volunteer at the Milk Bank now, bottling and labeling milk for other tiny babies. It is a blessing to be able to pay it forward for other families out there.

To all those mothers who donate milk, THANK YOU. You are the reason babies like mine get to come home healthy.