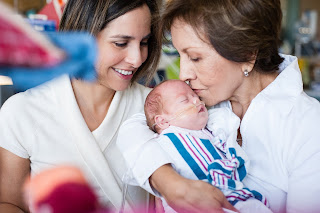 The story of our miracle baby started early in 2014. My husband and I were living in Houston at the time. One day we got the news that my youngest daughter, Veronica, and her husband, Jack, were expecting their fifth child. The due date was late September. We were excited since Jack had just transferred from Columbus, OH, to Austin, and this child was going to be born a Texan —  yay! I wouldn’t have to fly to Ohio as I did for the births of my other four grandchildren. This time we would be making road trips between Houston and Austin.

It so happened that this baby decided to make her entrance into this world 15 weeks early via an emergency C-section. We were devastated with the news and started to pray for my daughter and the baby. We did not know what to do, but we knew we had to do something. So, I started to ask the Lord for guidance.

When we first met Victoria, she lay in her isolette in the Neonatal Intensive Care Unit (NICU) of St. David’s Hospital downtown. It was hard not to cry, but I had to hide my emotions so as not to cause my daughter more pain. Victoria was so very tiny and full of tubes. She weighed 1 lb. 3 oz. and was 11” long. Once she was out of her isolette, I had to learn how to hold her and give her a bottle. My daughter could not nurse Victoria, as she did with her other four children, because she was on a medication not safe for nursing. Preemies and micro-preemies cannot digest formula well. Their intestines can be severely damaged and there are some cases that even lead to death, so Victoria was given human donor milk. Thanks to the Mothers’ Milk Bank at Austin, Victoria is alive today. We cannot thank this organization enough, as well as the wonderful and skilled neonatologists and NICU nurses at St. David’s. After a 113-day NICU stay, Victoria was discharged from the hospital with oxygen.

In September, after selling our house in Houston, we moved to Austin, leaving behind our oldest daughter, her husband, our grandson, friends, and 35 years of wonderful memories. Our realtor found us a house in Avery Ranch just 1.2 miles from the Cogwins. The first couple of years were very hard, as we didn’t know if Victoria was going to have any complications or major delays. When she turned ten months old, she no longer needed oxygen, and one by one, our miracle baby was discharged from all specialists. This past June 13th, we celebrated her fourth birthday. Although she is tiny, she is perfectly fine, smart, and our pride and joy. We cannot love her more. 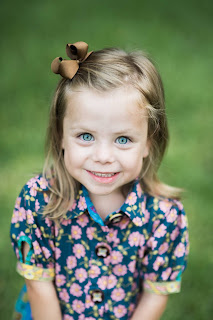 Our daughter Veronica is a stay-at-home mom and sits on the board of the Mothers’ Milk Bank at Austin. Her husband, Jack, is a territory manager for Epicor, a software company. Their son John (11) likes soccer and flag football, and their daughter Cecilia (9) likes cooking, baking, and dancing. The two of them participate in the Travis County 4-H Food Show and Food Challenges. Also in the family are Ana Sofia (7) and Lucy (5), who both like soccer, singing, and dancing. Victoria loves anything her siblings do. The four older children are swimmers and are happy and proud to swim on the Avery Ranch Redfish Swim Team. Victoria is working hard to join her siblings on the team next summer. Except for Victoria, who will start pre-K this fall at St. Thomas More Preschool, all the Cogwin kids attend Holy Family Catholic School.

My husband and I are both from South America. Fernando was born in Colombia, and I was born in Bolivia. We met and got married in Bolivia. We have two daughters and six beautiful grandchildren. Prior to coming to the USA, we lived in La Paz and Bogota. We also resided in Chicago, New York City, and Houston. Austin is home for us now, and we love living in Avery Ranch. It is a fantastic community and has so much to offer. We are proud to call it home.

*This story originally appeared in an October 2018 edition of Avery Ranch Living. We've republished it here with their permission.